This was sent earlier by email to: koolandthegang@redlightmanagement.com

People of Gabon are outraged by the attitude of Kool & The Gang which accepted to go to Gabon and entertain dictator Ali Bongo and the whole corrupt Bongo family and their friends. You may want to raise money for kids in your hometown, but you have to know that you have chosen the WRONG partners for your fundraising! The people of Gabon have been suffering for too long (47 years) under the dictatorship of the Bongo family, and you dare to come, in the middle of a deap social crisis, to entertain a dictator and his rich friends! This is outrageous! 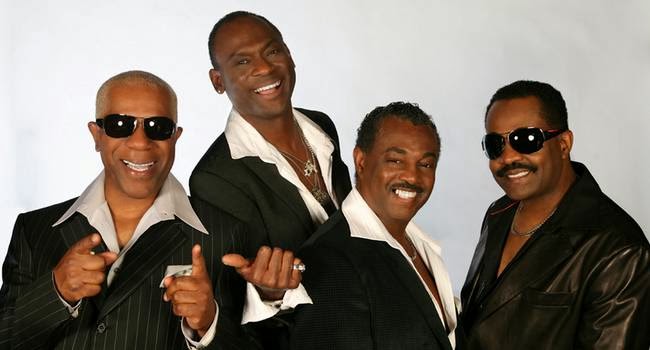 You must know that when Ali Bongo invite you in Gabon, the ultimate goal is still very much the glorification of his person.

You might have had good intensions in deciding to come to Gabon, and Ali Bongo and his friends must have told you (in bad faith) that Gabon is a beautiful country and everything is going great there. However, you must be reminded that Gabon is a republic and not a dynastic monarchy. You must be reminded that Ali Bongo succeeded his father who ruled Gabon for more than four decades, in scabrous conditions and by making use of force the way to maintain people in 'slavist' style of leaving. You must be reminded that the arrival of Ali Bongo as the head of state in Gabon was imposed upon the price of Gabonese blood, who fell under the bullets of an army transformed into a private militia and led by members of the Ali Bongo family. These historical and verifiable facts cannot be ignored by you.

You must do your homework before accepting invitations abroad. Just a quick research online should have shed some lights upon what you could be putting yourself into. Ask Spike Lee after he was invited to come to New York Forum Africa few years back, and he had to back down. You should know better aboutthe  Bongo family record on human rights violations.

Gabon is a country where corruption, embezzlement of public funds and illicit enrichment, have been elevated into principles of governance. You must know that the gabonese justice system is used for political and personal purposes.

You must know that the press is subject to systematic harassment and repression from a National Communication Council at the Bongo regime’s orders.

Few online clicks could have helped you uncover the barbaric practice of human sacrifices, euphemistically called “ritual crimes“. Yes, ritual killings involve children, like the very ones you are trying to raise funds for in your hometown. Just few days ago, 4 children, age 3 to 6, yes babies, were found dead in a car trunk. Their blood has been sucked out, drained! You can imagine for what purpose, as politicians in Gabon believe harvesting human organs and blood, including children, when they are still alive, is good amulets that will  make them rich, stay in power and live longer! This is the tip of the iceberg gentlemen! 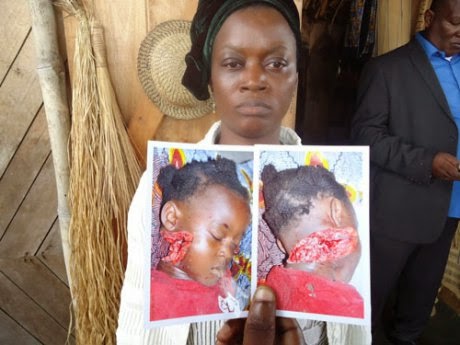 You must know that since the advent of Ali Bongo to power, people of Gabon have been witnessing a resurgence of ritual crimes whose perpetrators and sponsors (politicians) enjoy total impunity. Should I still repeat to you that these crimes consist in the removal, while the victims are still alive, of organs (eyes, tongue, clitoris, lungs, heart, blood ...) for fetishist purposes?

People of Gabon know that the ritual murders are sponsored by those in power, in search of glory, power, longetivity and money. Should I tell you that ministers of the current government, known to be among the closest to Ali Bongo, have been named in these cases without Ali Bongo being moved, to say the least?

The fight against the scourge of ritual crimes in Gabon has earned people of this country the support of the hacktivists Anonymous in numerous messages, starting with a stricking and eyes opener one dropped back on 13 April, 2013. The fight of Anonymous and now various number of people in social media continues, in particular with the operation DeathEathers (#OpDeathEaters), until justice is done in Gabon and all other the world against deatheaters or paedosadists exterminating children! Do you want to get yourself into that spiral of denounciations in social media?

You are therefore asked to question yourself about the sense your presence in Gabon will make. Thousands will ask themselves how much those like you who come to the support of Ali Bongo respect the rights of citizens and human life. Thousands might be left wondering if the values you profess are universal, whether what is valid in the U.S. is also valid in our country. How should we interpret the fact that you are ready to come endorse an anti-democratic, illegitimate and brutal power that deprives many Gabonese of their civil, union and political rights solely because they have stated loudly and clearly their opposition to a monarchical and outrageous devolution of power?

How will you explain that you are indifferent to the fate of our children slaughtered for fetish purposes? How is it that some would prefer to close their eyes to the fact that our children are crammed into classrooms of over a hundred students, Ali Bongo having not seen fit to build one single school since his accession to power, has come to requisition the locker room of a football stadium to serve as a classroom? Not to mention that right now, as we speak, teachers and other public servants have been on strike for over 2 months for right reasons, but the only way Ali Bongo and his government deal with them is by teargasing them when they dare to protest peacefully on the street? At the same time the government says it can't afford to give the workers what they deserve, we learned (via Mediapart) that the Bongo family has set a corrupt system that permits them of looting millions of dollars out of the country resources; controlling pretty much the whole economy of Gabon, without telling the people!

How to understand that you are ready to be associated with an event which cost so much in a country where women still give birth on the floor, where the students of the only university in the country are studying in more than deplorable conditions, where people still have to pay so much to get proper treatments or die of low fatal rate diseases in so-called hospitals?

Convinced that you did not know what you were getting yourself into, and that you have respect to human dignity, freedom, rights of children to live their lives without being butchered for fetishes, equal opportunity and that you place human dignity above all, you are now asked to reconsider in all conscience, your participation to a show that will glorify, in time of high social tensions, a dictator and deatheater, Ali Bongo.

Use your conscience, your humanity and refrain from taking part in this event which is a pure communication operation to the glory of dictator Ali Bongo.

For good practice, you are informed that the contents of this note will be communicated to the press, civil societies and human right organizations and activists worldwide.

Don't fall easily for money; humanity should not be lost from your part, at this crucial moment of Gabon history.

The World is watching. Kool & The Gang!

THE biggest ritual murder of Gabon's history goes back to the night of 25 to 26 July 2006 in Mabougnié, a town on the border of the province of the Moyen-Ogooué (Lambaréné).

An octogenarian, Véronique Lekohouin, her daughter Véronique Massibenguilé (55), her granddaughter Kessany Myriam, 32, her great-grandchildren, Dieudonné Aaiun, 4, and Mary Mirianice Kombila Ibiatsi, 3 months, who lived all in Mawongo, a village located in the mining region of Mabougnié, were exterminated with a machete by Justin Massandé, a man, 44, adopted at a young age by the family of the victims.

The man had committed the killing with his friend, Anatole Mboma, with the complicity of Massandé Valentin, Pierre Claver Nzanga Anatole Nzanga and Diasbo Mouloungui. Thes criminals have removed organs and drawn blood on their victims. After their dirty work, they burned the five bodies in an attempt to remove traces of mutilation.

A few days after the massacre that shocked the whole country, Massandé Mboma and his sidekick reported committing the massacre at the request of a woman, Jeanne Bombé, sister-in-law of Martin Mabala, Minister of Forestry at the time of the events. They said that it was the latter who had sponsored the massacre.

Jeanne Bombé was finally arrested. But she was released with the pressure from Minister Mabala, who was in France and had to rush back to Libreville after the announcement of the arrest of the sister of his wife. To prevent police officers from arresting his sister-in-law, he hosted her at his home.

During the ministerial reshuffle after the tragedy, Martin Mabala was appointed Minister of Justice. Curiously, it has not worked hard for the truth in this case, even if the all five people exterminated were part of his in-laws.

During his preventive detention, Anatole Mboma died at the Central Prison in Lambaréné. Jeanne Bombé also died in August 2014. Other people involved in the massacre were released and continue to take it easy. As if nothing had happened.

Find the full story in ''the ugly face of Gabon '', to be released soon in France. 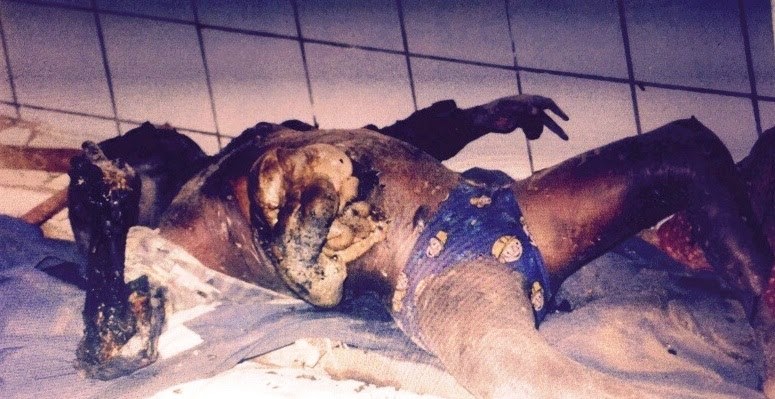 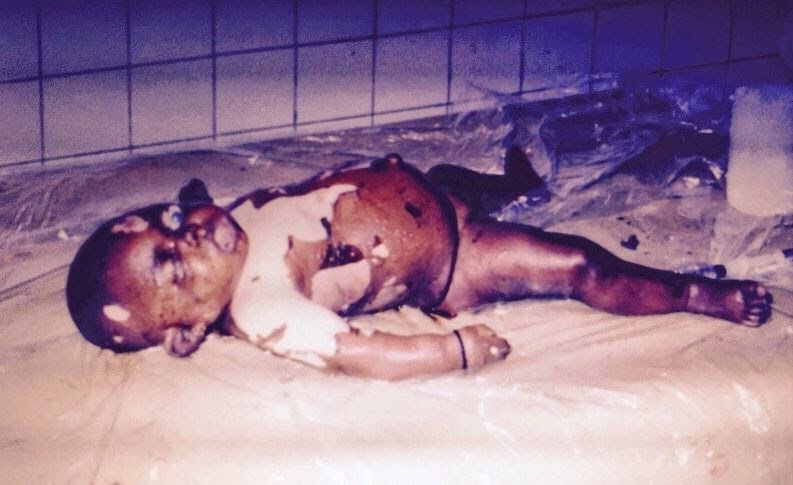 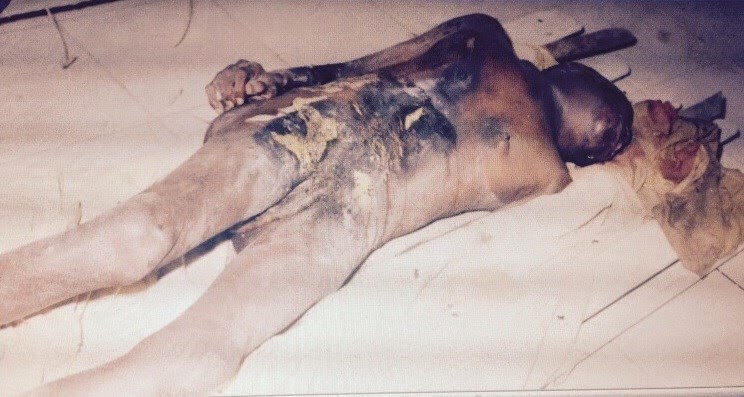 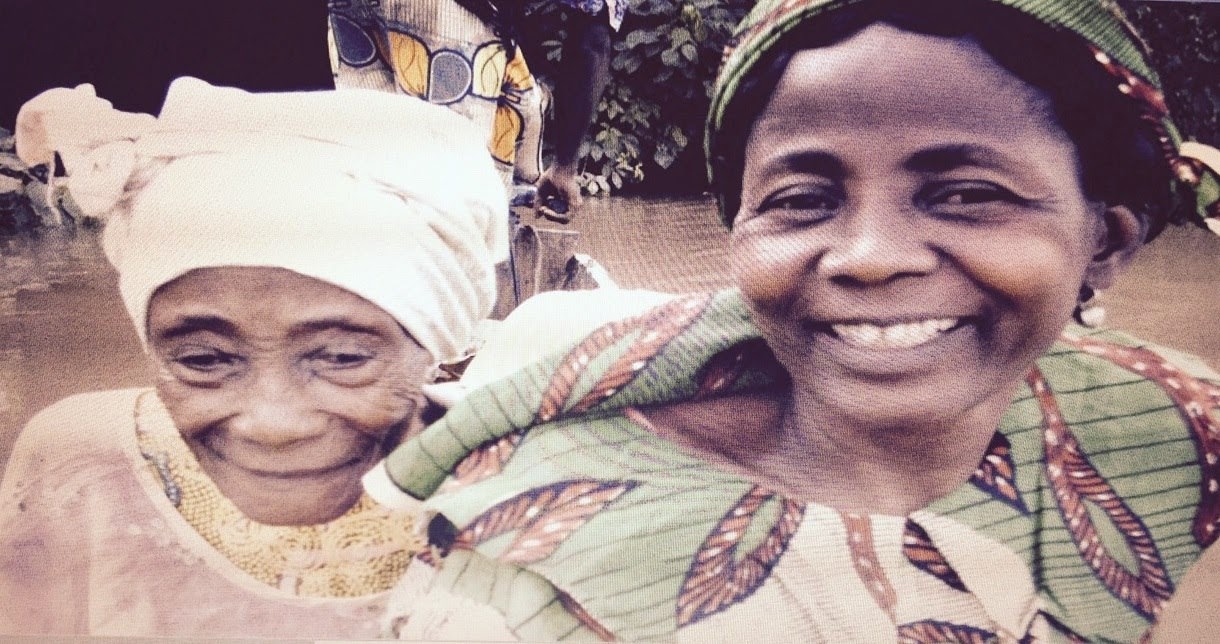 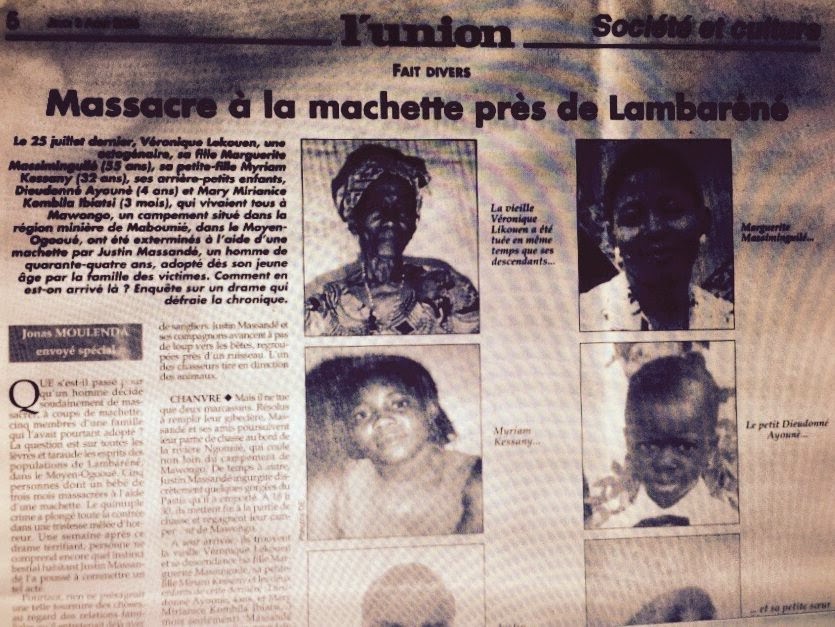 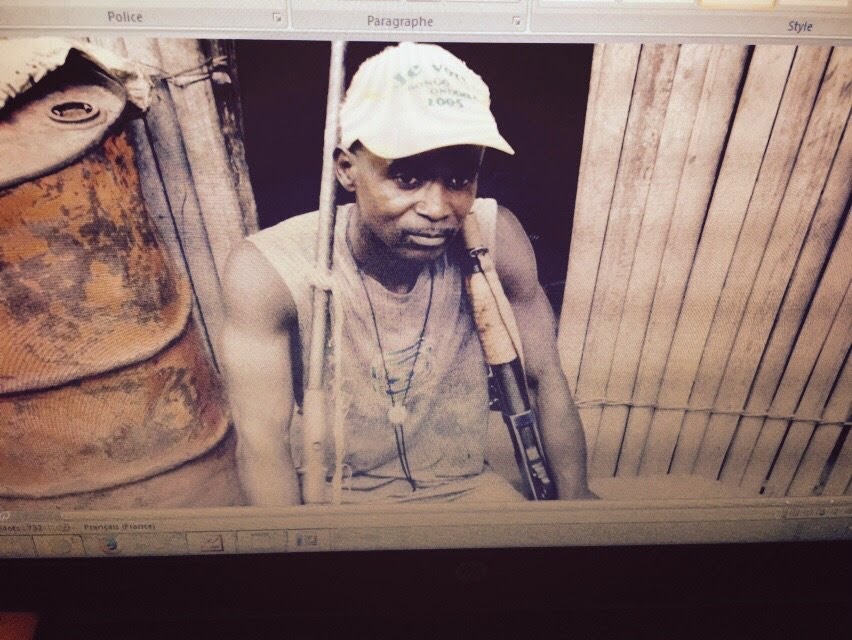 COMPLAINT TO THE ICC FOR RITUAL CRIMES COMMITTED IN #GABON

COMPLAINT TO THE ICC FOR RITUAL CRIMES COMMITTED IN GABON 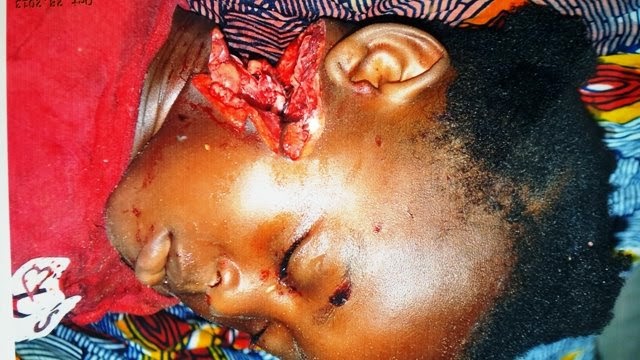 Now nothing will be as before. Ritual crimes in Gabon will no longer remain unpunished. Sponsors and authors will soon be accountable.

With the Gabonese diaspora in Europe, Desiré and I decided to go to the headquarters of the International Criminal Court (ICC) in Holland to file a complaint against Ali Bongo, Maixent Accrombessi and Alfred Edmond Nziengui Madoungou for murders with organ harvesting.

These are recognized as crimes against humanity by the Rome Treaty ratified by Gabon. The Gabonese justice does not punish the perpetrators of ritual crimes because the members of the government are involved, we decided to action and push things at an higher level.

We have already gathered a team of five French and Belgian lawyers, who are currently working on the case to make sure it is ready for legal procedures. I sent them all the evidence that I held, fruit of my fourteen year old work on the field tracking ritual killings in Gabon. In a few weeks we will go to the Netherlands to file the complaint in due form.

Enough is enough! Gabon has suffered too much from the bestial instinct of its rulers. All the evidence we have in our possession show clearly the responsibility of Ali Bongo and his collaborators in ritual crimes, which had boomed since this regime came to power in 2009.