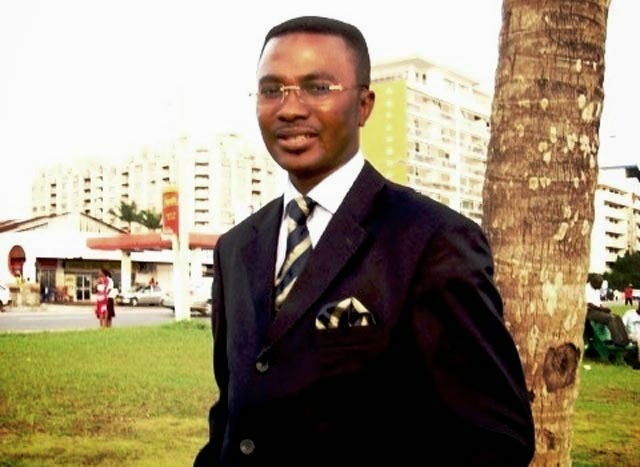 After taking power in 2009, the Gabonese head of state had sounded the death knell of mismanagement and the squandering of public funds. Considering all, it was not a bad thing. But five years after his speech, his will is like a myth of Sisyphus. The financial orthodoxy is challenged by his unbridled love of luxury and his childhood dreams. Libreville to Paris, to London, New York, etc., the president shines with delusions of grandeur. At taxpayer expense. 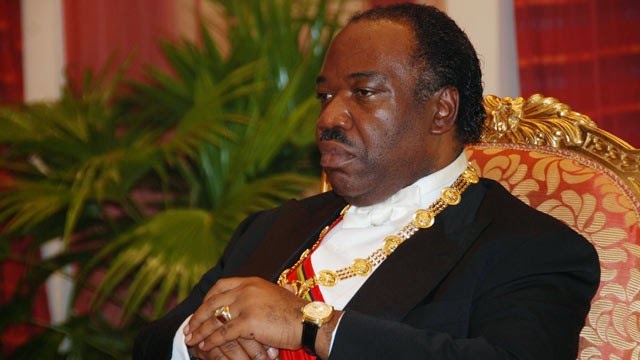 THIS IS the story of a spoiled child who continues to fulfill his dreams with public money. At 55, Ali Bongo Ondimba does not seem to have finished his adolescent crisis. He is engaged in all kinds crazy expenses wherever he goes, calling on him leering.

Buying a crystal «baby foot» game; organizing boat races, carnival with Brazilian nude women, expensive sports competitions; acquisition of gleaming vehicles, residences among the most expensive in the world; buying a private jet to his wife, etc. The Gabonese head of state is anything but a model of financial orthodoxy.

According to our investigations, Rolls Royce and other Bentley he had ordered after taking power in 2009 have cost 10 billion CFA francs (about 19.4 millions USD) to the Gabonese government. And every year, he needs to purchase all new luxury models that come out of the most prestigious auto plants in the world. 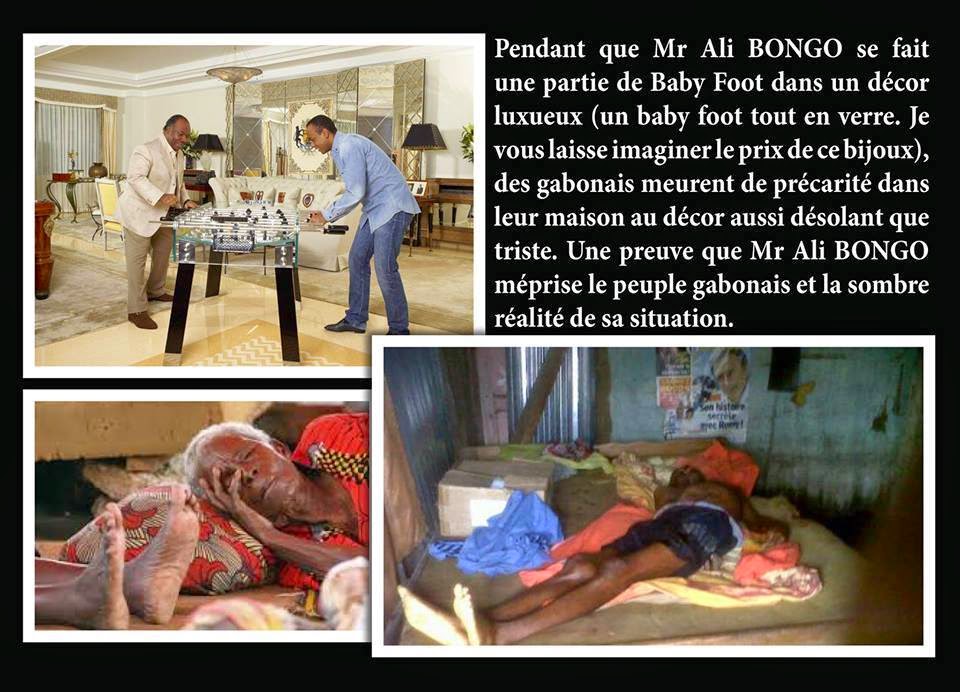 His entourage described him as a man obsessed with ostentatious luxury, who does not hesitate to spend a fortune for nothing. "He loves luxury and buy only what makes the difference. He often wants to place himself above others ", says a close relative of the president, justifying the character of the latter by childhood he experienced in his family. "Son of president, he was a spoiled child. He could go interrupt the discussion between his father and his counterparts to present the catalog of a new version of cars he wanted to buy ", adds one of the closest associates of Ali Bongo Ondimba.

FANCY ESTATES. Since his arrival as the head of the state, the Presidency of the Republic does not spend less than 500 billion CFA francs (more than 972 millions USD) per year, according to a source close to «the palace near the sea» (name given to the main presidential office and residence). Childhood dreams of the spoiled tenant of the premises is a real gulf slot. According to a British newspaper, the Gabonese head of state would have spent 20 billion CFA francs (more than 24 millions UK pounds or 38.9 millions USD) to buy the house of the Mayfair property tycoon Derek Quinlan Irish.

He uses public funds to buy «real estate treats» to fill primarily his own needs, while the people wallow in underdevelopment and poverty, as denounced by his opponents. Since 2009, he bought (in priority) three properties abroad for nearly 100 billion CFA francs (about 194 millions USD), said another English newspaper. 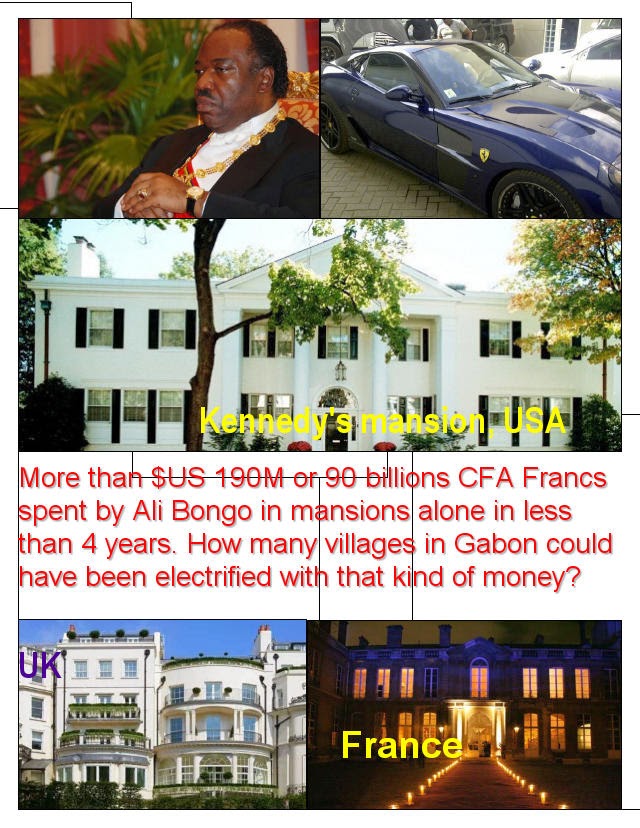 The other major acquisition, the newspaper said, is the Hotel de Maisons, also called Hotel Longueuil, located at 49/51 rue de l'Université in Paris. It was sold April 21, 2010 to the Gabonese State for around €100 millions in dubious circumstances. The President of Gabon, Ali Bongo, is the main beneficiary of this transaction.

The investigative newspaper «La Lettre du Continent» reported that Ali Bongo has recently acquired a villa in the upscale neighborhood of «La Sablière» in Libreville, formerly owned by his late sister Albertine Amissa Bongo. The acquisition cost about 5 billion CFA francs (9.7 millions USD) and the seller was none other than her mother Josephine Kama Dabany, mentioned the confidential newspaper. The villa is for the eldest daughter of Ali Bongo Ondimba, Malika Bongo Dossou, who is by the way, also deputy mayor of Akanda (near capital city Libreville).

Vehicles and gadgets occupy a prominent place in the expenditure of Ali Bongo Ondimba, said his entourage. He acquired a Bentley for over 200,000 euros, a Ferrari 456 GTA for 75,000 euros, a Mercedes S600 limousine for 158,200 euros and a Porsche 911 Carrera for 81 116 euros. In addition, the F1 boats race in Gabon cost 19 billion CFA francs (more than 36.9 millions USD) to the Gabonese government. 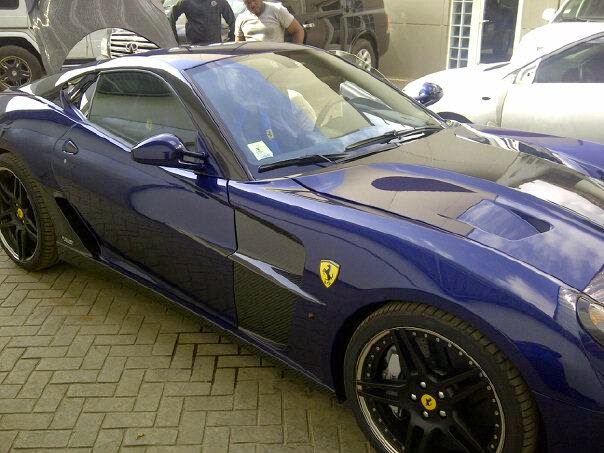 GENEROSITY FOR A REASON. Between April 2010 and April 2011, Ali Bongo Ondimba and his wife spent at French upscale restaurants €926,000, including €144,000 at Hermes and €132,000 at Van Cleef. Nearly one million euros from Hermes and Van Cleef paid with four American Express Centurion. Available by invitation only, the Centurion Card is reserved to the very wealthy of this world.

The football game that had opposed the national teams of Gabon and Brazil, played at the request of Ali Bongo Ondimba, would have cost 1 million USD, paid by the taxpayer. His wife spent a million euros in a luxury store in Paris; at a rhythm of 656 million CFA francs (1.3 million USD) in one day. During a stay in Paris, the Gabonese presidential couple has stayed in the Royal Suite #115. Four nights at €8,500 (5 575 720 CFA francs) per night or €34,000 (22 302 881 CFA francs).

The envelope of the African Cup of Nations hosted by Gabon was totaled 400 billion CFA francs (777.7 millions USD), or 610 million euros. The GL Events Company received from Gabon 7 billion CFA francs for organizing the Gabon closing ceremony of the 28th African Cup of Nations football. The financial follies of President Ali Bongo Ondimba do not stop there. He donated two million five hundred thousand United States dollars (USD 2,500,000) to Somalia.

His generosity extended interested in the University of Oregon in the United States which he offered 54 billion CFA francs (more than 100 millions USD). The American star R. Kelly has been paid more than 1 million USD for a single solitary playback singing his hit "I Believe I can fly", to Ali Bongo and his guests for the inauguration of the (un)famous economic zone of Nkok.

Ali Bongo Ondimba, a big show-off of his time, does not neglect the dress flap. In 2010, he spent 88,000 euros in cash to purchase costumes at Pape N'Diaye, a recognized designer, based in France. The list of expensive follies of the head of state is not exhaustive. The expenditure listed here are only the visible tip of the iceberg. In everyday life, the tenant of the presidential palace is squandering public funds to chapters that are not worth the trouble. In the meantime, the country is mired in extreme poverty.